Like the iPhone, many objects have effects far more dangerous than that of a single machete simply by their manufacturing process. Creating disposable containers out of non-biodegradable plastic is not a good idea, and is one of many examples of a lack of foresight (or concern) for the health of the environment. There is an island of garbage in the Pacific Ocean bigger than Texas, for crying out loud. But unlike the iPhone, the machete represents the culture of an oppressed working class exploited by capitalists who love money more than people. The iPhone represents a consumer culture that would rather be blind to the misfortunes of the people that build iPhones than to acknowledge them. If the machete is a symbol of political uprising, then the iPhone is a symbol of political acquiescence and disregard for the environment. Besides, the iPhone is a new addition to the American canon. The baseball bat is more comparable to the machete than the iPhone.
Like the machete, the baseball bat is a tool, but instead of uniting people through work, the bat unites people through baseball. Baseball has a unique spot in American culture as America’s pastime. Unlike so many other things, baseball unites people who come from many different backgrounds. For nine innings, people could forget about religion or politics and just throw a ball around. For this reason, the baseball bat symbolizes a tool that represents people from all different backgrounds. But the baseball bat can also be used as a weapon. Most people who own a bat may keep it by their beds to use in self-defense against intruders. A bat is light, easy to swing, and can do considerable damage when applied properly. 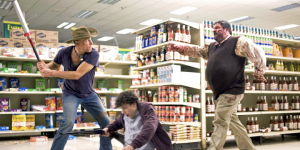 As useful as a bat may be for self-defense, it serves another purpose in popular culture. And that is for killing zombies. There are countless movies, TV shows and video games where characters use bats to smash zombie skulls. And as zombies have become popular in our culture, the bat has come to symbolize zombie killing as a new pastime, loved by people from diverse backgrounds. Before zombies entered the mainstream, people watched baseball to see bats smash balls out of parks, and in 2015, people gather around their TVs to watch bats smash zombie skulls. Popular culture takes people’s symbols and transforms them into their own. Machetes may have symbolized a proletarian struggle, but in popular culture they represent serial killers. Baseball bats may have symbolized baseball as a national pastime, but in popular culture they represent zombie killing as a national pastime.